Crocodilian Enrichment: The good, the bad, and the untried

24 Aug Crocodilian Enrichment: The good, the bad, and the untried

Posted at 09:40h in Uncategorized by alligatorfarmadmin 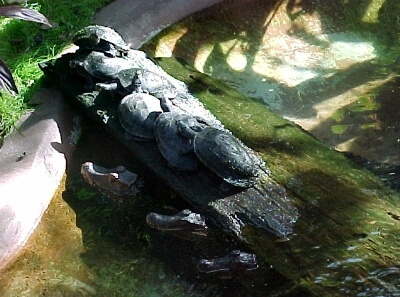 Managing a large number of crocodilians in a variety of settings can be quite a challenge. Each time we interact, or don’t interact, with these animals can greatly affect all aspects of crocodilian husbandry. This paper highlights several types of enrichment we’ve applied at our zoo and how it’s affected the animals, our staff, and even the guests that visit daily.

One of the most basic types of enrichment that affects everyone is enclosure design. Many features of an exhibit can be visually pleasing to guests, and also meet the needs of the crocodilian and keepers alike.  Naturalistic exhibits can especially provide the animal with an enriching environment. Soft, sandy pool bottoms, natural visual barriers such as fallen trees and large rocks, dense vegetation among areas of wide open space can all be found in their natural habitat. Guests like this type of exhibit because they often assume the animals living there would be much happier than in a more man-made setting. With natural features and substrates the crocodilian even has the ability to change things to suite itself. Climate control is often much easier when the animal can sit in the mud or the deep end of a pool, dig and/or crawl under shrubs or trees, or bask on the top of a warm, flat rock or log. One has to balance this with potential challenges though: Can the crocodilian disappear from public view completely, and would that be O.K? What issues would arise if the animal sinks into a muddy pool every time a keeper needs to enter the exhibit or just visually inspect the animal. There are safety issues there, of course, as well.

In an exhibit that’s not so natural, many features can be added to meet the same goals, and sometimes be done in a manner that benefits everyone more so than a natural exhibit.

Many of our pools at the Alligator Farm are made of concrete in the ground and surrounding wood panel fencing, often with land space smaller than we’d like. We’ve had to get creative with exhibit design to meet the needs of the animals, guests and keepers. For example, a large, flat log overhanging a corner of the pool can replace a naturally overhanging bank, providing comfortable hiding for the croc and still be placed so guests can view the animal. This and similar features often give the animals a place to retreat to when a keeper enters the exhibit area. Now you know where the animal is and if it can’t see you, then it may not act defensive or aggressive.

One of the favorite places for a croc to hang out is in the flooded area along side an overflowing pool that happened accidentally! They have the best of both worlds and great opportunities for thermoregulation in that a “beach” type feature like this allows them to soak up the sun and adjust their temperature by sliding to different depths. This also allows for easy, fast retreat if something bothers them. By adding these artificial features we create favorite basking, hiding, and feeding spots in the areas that meet our needs best. With exhibit design we address issues of animal welfare, guest satisfaction, and keeper safety all at once. By changing some things around occasionally we continually provide enrichment and learn what works best and what doesn’t.

Here are just a few of the questions we ask ourselves before, during and after implementing changes to our enclosures and in building new ones:

Is it safe for guests, keepers and the animal/s? (Can the animal escape or injure itself by climbing on some new, wonderful furniture?!!)

Are the needs of the animal met while still giving the paying guests a good experience?

Does the design allow for ease of periodic maintenance and safe visual/physical inspection of the animal?

Will the design work in all types of weather or any other possible outside issues?

Can it be altered easily? (More/less, bigger/smaller, different animals)

Is it affordable and sustainable?

Did we get input from all the keeper staff? (Sometimes even the one with the least experience can have a great idea!)

Though all forms of enrichment affect an animal’s senses, there are several types we’ve tried that we put under the heading of “Sensory stimulus”. Enclosure design can certainly fall under this category as well, but we think of sensory stimulus more of moving the furniture or features around in an enclosure and reintroducing the animal to the new environment, rather than building a whole new enclosure.

Just by taking a log that was resting on land, and putting it halfway into the water, we’ve seen crocodiles find new “toys” to play with, or even new favorite basking or hiding spots. Going in and hosing down crocodilian enclosures is certainly stimulating to them. It’s sometimes a bit stressful, but stimulating. Not a common practice, but we’ve actually taken fecal material from one enclosure and put it in another. Talk about sensory stimulus! In many cases this has been very stimulating. We’ve seen crocs rubbing their heads on the ground for hours seemingly very interested, and in some cases the introduced material was completely ignored. A big disadvantage could involve quarantine or contamination issues, all dependant on the enclosures or zoo in question. We have a monkey enclosure with a small river in it that empties into a crocodile pool next door. It’s mostly ignored now, but when it was new, it was a great way to get the Cuban crocodile to spend all its time in one spot!

Many forms of sensory stimulus are even unintended; a bunch of guests opening umbrellas all at once when it starts raining, power tools running close to their enclosures, or even one alligator bellowing that starts all the others doing the same.

Something the alligators find enriching that we look for every spring in north Florida is Bike Week. We’ve had alligators start bellowing immediately after thirty Harleys roar down A1A all at once. On those occasions that the Space Shuttle is approaching for a landing in Florida, we get reactions from a lot of the animals. As soon as I hear that sonic boom I can expect the alligators to start bellowing immediately! Just keep in mind that these types of stimulus can happen at any time. Getting the crocodilians all worked up and moving when you’re in the enclosure and not prepared for it can be a bit disconcerting!

Dietary enrichment and food alternatives can be a never ending and rewarding way to stimulate crocodilians.

Live prey, food with textures different than what’s normally offered, (such as prey with exoskeletons.), Oversized food that requires a lot of biting and pulling or even sharing, food placed in areas the require the animal to either search for it or overcome obstacles in order to get it. We have had issues with alligators injuring one another accidentally because they were all going after the same large food item, so we’re very careful when trying some of these methods of enrichment in multiple specimen enclosures.

Some of the best video of dietary enrichment I’ve seen were made right here at our zoo. Like the video of our Red footed tortoises eating produce and being joined by several small crocodilians of various species that seemed to enjoy the squash, apples, and even the greens as much as the tortoises did!

My personal favorite happened in our exhibit with two adult and about 14 yearling Siamese crocodiles. We threw a whole nutria to the female and rather than eating it, she held on to it while all the little ones walked up and pulled pieces off. It was incredible to watch the female sit so calmly when we know she wanted to eat it, but instead let the little ones wrestle and spin, pulling off one bite at a time. When the large male approached to gently try to take it she wouldn’t let him have it, but continued to let the little ones eat.

We’ve witnessed crocodilians carrying around fallen palm fronds, banana leaves and fallen fruit. Even walking up and pulling kumquats off the branch themselves, going into the pool to eat it, and getting out doing it again. Even the alligators in our naturalistic swamp enclosure occasionally lunge slowly up out of the water for low hanging elderberries. The first time I had seen that I thought it was just an alligator mistaking it for something else, but it swam about twelve feet to the right and did it again.

After Halloween it’s lots of fun for the alligators and guests when we throw leftover pumpkins into the pools and watch the commotion. Pumpkins are highly visible, they float, and a blast to watch when being chased and grabbed by alligators! And pumpkins are safe and inexpensive too! (Often FREE after Halloween.) There could obviously be a problem if the alternative food that wasn’t intended is harmful or even poisonous, so care is needed here as in most of enrichment. Other than that, your imagination is free to come up with many more  types of enrichment revolving around food and diet.

As we all know, reptile enrichment is often overlooked at many zoos and even in private collections, but we now understand that it’s just as important for reptiles as it is for birds and mammals. Enrichment brings out behaviors in animals that are often hard to see otherwise, Even making transporting crocs easier or visual inspections more thorough. Allowing new staff to come up with different ideas and learn from watching the enrichment in use can be an important tool in their training as well as the crocodilian. Enrichment and training are not necessarily two different things, but overlapping tools for all aspects of crocodilian husbandry. Remember, Enrichment is often used as a training tool, and training can be quite enriching. 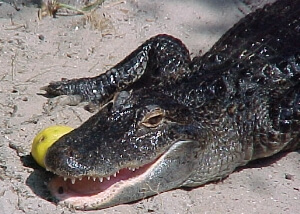